For those of you who don’t know me, my name is Mel Holland. I’m one of Masters swimmers and the one who tends to swim unusual events like the Winter World Championships competing in 0 degree water. Well as much as I love that, winter swimming has all been part of training for the much bigger goal of attempting to swim the English Channel solo earlier this year.

I’d never entertained trying to swim to France ever in my life until I completed another crazy swim called 2Swim4Life. It’s a lido based event in Guildford where swimmers complete 1 mile an hour every hour for 24 hours. Every Channel soloists will tell you the 2Swim4Life event is much much much harder than swimming to France. Taking that on board and completing the event successfully, I decided to make the Channel my next challenge.

So I booked my slot 3 years in advance and started participating in colder and longer events as preparation. As part of my training I completed 3 channel relays the year before so when it came to the big day, I was completely used to the experience of meeting the boat and my pilot and taking the trip from Dover to my starting point Samphire Hoe.

My starting time was 11:03 pm meaning a lot of night swimming. The huge bonus to that is you can’t see all the jellyfish in the water with you, trust me, they are pretty ugly! Especially the Compass ones. For the start you have to swim to the beach, exit the water, raise your hands above your head, wait for the hooter and then you’re off! Get back in the water and swim to France!

I swam back to the boat and settled into a rhythm and wondered whether I would feel any jellyfish before my first feed due after 90 minutes of swimming. The jellyfish definitely turned up sooner, with one trying to hug my left foot. The stings were only mild so after my first feed I swam on and soon lost myself in my rhythm of swimming to the next feed which were then happening at 45 minute intervals and just getting on with it.

There weren’t many ships about except for the ferries but they were lit up in gold lights like Christmas trees. I was really lucky with the wind being next to non-existent and the sea being very calm but that meant lots of jellyfish for most of the way. So I just kept my eyes shut so I didn’t have to see them. And because of the calm conditions we were treated to a gorgeous misty sunrise to my left about 6 hours into my swim. 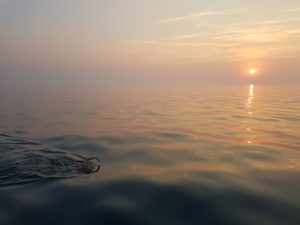 Feeds to this point had been pretty uneventful with me drinking what I was given and then just getting on with swimming, but my body decided that it had had enough and brought up everything I’d had on the swim and what felt like everything I’d eaten that week! It made me happy that the jellies had to swim in it too, so once done, I just got on with it and my crew switched me to flat coke which is what I had the rest of the way, except when my crew snuck in some more carbohydrate powder, cue more vomiting!!!

But at this time we were well over half way and closing in on France. At one point I felt a woosh underneath me, I didn’t have a clue as my eyes were still firmly shut. Another time I felt something hit me on the head, again eyes firmly shut and I just kept swimming. Later on the boat my crew told me I’d actually headed a football and that they didn’t know what it was that had swum under me but it was big!

My crew were also instructed not to tell me where I was until I was nearly out of the 2nd shipping lane, about 6 or so miles but I’d been keep tabs on how long I’d swam and managed to ask them exactly at the point they were allowed to tell me. I was told about 4.5 miles, yelled out “Result!”, swam off and then realised they meant nautical miles which is about the same as 6 miles.

Not long after the tide had begun to turn and this is the moment the pilot comes out and asks you to sprint. After 10 hours of swimming and having chucked up everything you’ve eaten for the past month, swimming hard for about 1.5 hours isn’t the easiest! My friend Hayley got in to try and get me to race her, but it annoyed me so much I swam her into the boat so she had to get out. But whilst she was in, she kept looking up and I couldn’t figure out why. Until I looked up and saw France, and it was only over there!!!!! So I put my head down and swam as hard as I could to make it before the tide turned fully so I could land on Cap Gris Nez, the closest point to England. If you miss it, it can mean another 2 hours of swimming. Unfortunately lots of French fisherman had put out a stack of unmarked lobster pots, so my pilot had to turn me left past the cap and to land me on the other side. Luckily for me, it meant only about another 30 ish minutes of swimming in total, I wasn’t bothered as I was going to make it to France! 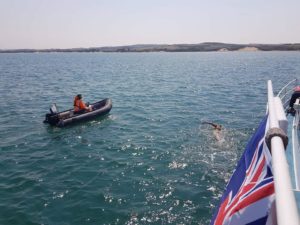 Cue the rib coming to my side to escort me into a beautiful sandy beach. I’d finally opened my eyes whilst swimming and was actually appreciating the jellyfish until I got badly stung on the way onto the beach. In my head I was joyously singing “last sting, last sting” and started watching the ridges in the sand and the water got shallower and shallower to where I was finally able to stand and walk out on the beach and realise that I’d actually swum from England to France on my own!!!!!!! I had a random French man greet me with very pool English who asked if I had swum only once from England, my reply was yes, just once today. I think he actually meant had I done it on my own!

I collected some pebbles as a memento, swam back to the rib and got hauled aboard. The rib then took me back to the pilot boat to begin the celebrations and the party begin on the way back to Dover. My official time was 12 hours and 45 minutes. Apparently I said never again when getting back on board and then about 10 minutes later, had decided I wanted to do it again and again and again! Something I’m still keen on.

Thankfully, I was back out on a 4 way 6 person channel 5 weeks later, only the 3rd team to complete this in the world, and the first British and European team. Our time was 46 hours and 13 minutes.

What’s next? I’m hoping to be back out there in 2020 and this time might include a tumble turn!!!! 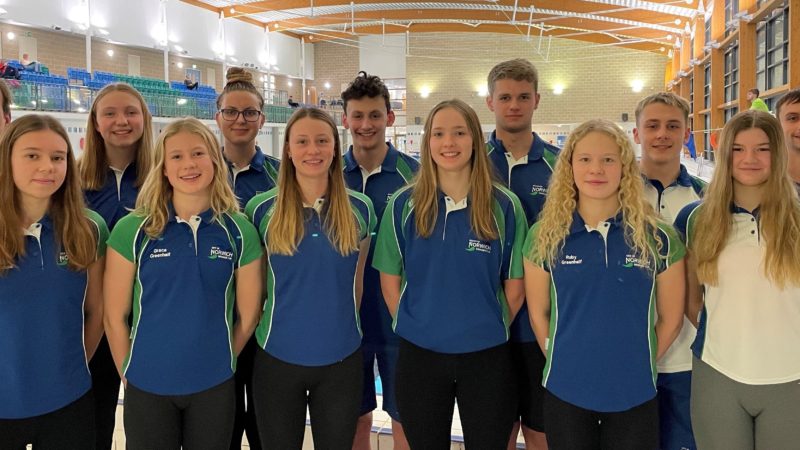